Nitin Gadkari, the union minister for road, transport and highways has approved a draft notification to make 6 airbags mandatory in vehicles which can carry upto eight people. This statement comes after the minister had earlier asked all car manufacturers to offer six airbags as standard on all their vehicles, in an effort to significantly improve the road safety in India and with this new draft approval, his earlier statement may prove to be true in the near future. 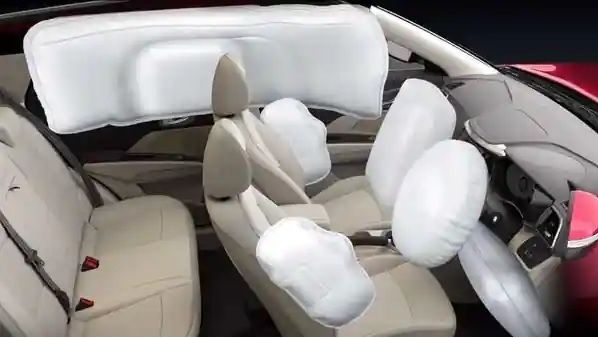 This is what the union minister tweeted from his official twitter handle, “In order to enhance the safety of the occupants in motor vehicles carrying upto 8 passengers, I have now approved a draft GSR Notification to make a minimum of 6 airbags compulsory”. This clearly shows the governments push for safer cars in India.

Earlier, the government had made driver-side airbag mandatory from July 1, 2019, for all passenger vehicles and the dual-airbags as standard on all vehicles became compulsory from January 1, this year. As for this new development, the minister has not yet revealed the exact timeline for when this order may come into force but it may be passed by the end of this year if the earlier decisions of the government are anything to go by.

This new development in the vehicle safety initiative of the government will have several positives and negatives for both the customers and auto manufacturers, as offering 6 airbags as standard in a vehicle will definitely improve the safety rating, though this could lead to several challenges for auto manufacturers, mainly in the budget segment.

The most affordable car in the Indian market, Maruti Suzuki Alto 800 price starts from Rs. 3.15 lakhs, which has increased in the last two years due to the addition of the dual airbags and now the addition of 4 more airbags will drive up the costs inevitably.

The cost of a front airbag in budget cars range between Rs. 5-10,000, whereas the side and curtain airbags cost nearly double these, so, the cost for six airbags will drive the costs of the entry level cars by at least Rs. 50,000 which is a significant increase for both the companies and the potential buyers.

This will be a big headache for most manufacturers in India as currently cars having costs above Rs. 10 lakhs offer 6 airbags and that two in select variants and if car sales in India are to be seen the majority sales are in the Rs. 3-6 lakhs range, thus this will be an interesting challenge for auto companies to incorporate additional airbags at minimal effect on the cost of the vehicle.

Car majors like Maruti Suzuki, Nissan and Renault don’t offer a single car with 6 airbags across their line-up, which shows the amount of re-development that has to be done by these companies for their cars. Since, adding airbags do require re-engineering the body shell and the interiors, the added costs could be significant for the car manufacturers as well as it may require a lot of time to develop for the safe and effective way of deploying the airbags.

This new announcement will definitely have a cascading affect on the auto industry which is still reeling from the after-effects of the pandemic induced rise in input costs, as well as the added pressure of the second phase of CAFE norms and updated BS6 emission norms which come into effect by 2022-'23. While this is a great step towards more safer cars in India, this decision from the ministry will alter the cost structures for automakers and customers as well with the auto manufacturers trying to absorb as much of the increased costs but the potential customers will also feel the after effects, as the cars of the future in India will get expensive but also offer better safety on our roads.