Kia Carens is the latest entrant in the MPV line-up with its global unveiling on December 16. Kia had kept the prices under wraps but still it disclosed quite a few features about its car, which will go up against the likes of the Maruti Suzuki XL6, Hyundai Alcazar, Toyota Innova Crysta and by the looks of it they went all out with the Carens. 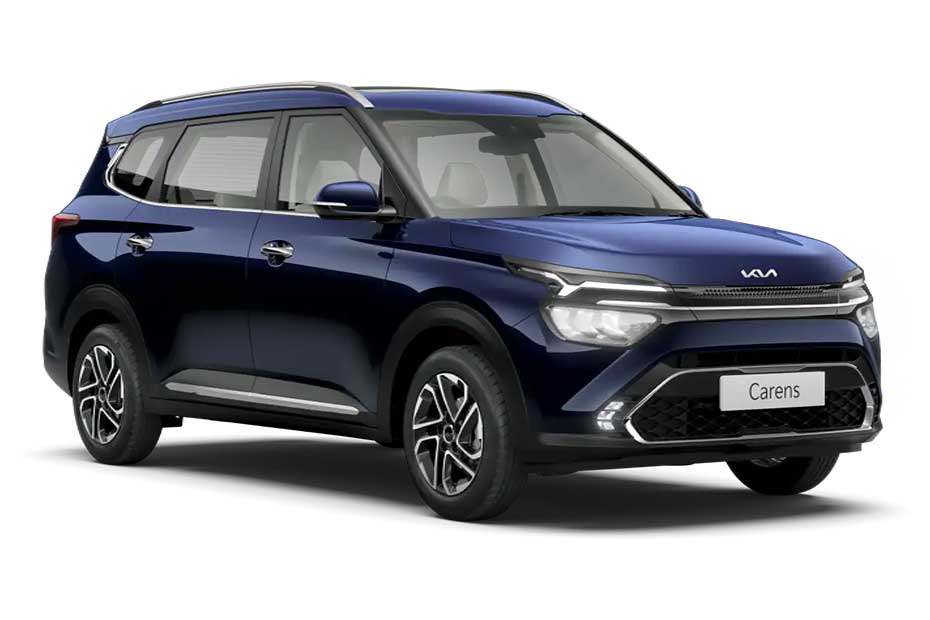 The Kia Carens has a unique design language and it is unlike any other car in the MPV segment. The Alcazar is clearly an elongated Creta and the XL6 is just Ertiga with mild changes on the front, whereas the Innova Crysta is the oldest in here and is so common on the roads that it doesn’t bring the uniqueness quotient with it, whereas the Carens with its European design language catches your attention, as every car in the competition has big grilles in front the Carens ditches that with what Kia calls the ‘digital radiator grille’ which gives the front a clean, sleeker look. Also, Kia has used the split headlamp setup nicely with a chrome strip running the width of the ‘digital grille’ and differentiating the y-shaped DRLs from the tri-beam LED headlamp cluster. The bumper houses the large air dam, which is completely surrounded by a chrome strip with three, vertical LED fog lamp setup.

From the sides is where you get the idea of the size of an MPV and this is where the Innova Crysta rules the roost with its massive length advantage, while the XL6 looks small as it is based on the Ertiga which is not a big car but is great for city driving with its compact dimensions. The rear of these MPVs have the same bold, chunky bumpers with large taillamps which do enhance the overall looks.

Coming to the cabin, the Innova Crysta’s cabin is the least attractive, also its all-black theme doesn’t help alleviate the atmosphere of the cabin. The XL6 also follows the all-black theme but it is helped by a modern looking clean dashboard layout, but the Alcazar, with its dual tone colour options and tech loaded cabin makes it feel like a premium looking interior, in the Carens though, the Alcazar faces tough competition as the Carens offers the most premium looking, minimalistic yet modern cabin which is enhanced by the light beige and indigo-coloured seats, which makes the cabin feel plush and airy.

Here also, the Carens gains a lead on its Korean sibling by outdoing the Alcazar with its slightly more premium looking cabin while the XL6 does put in an effort, it still is no match for the Koreans while the Innova is in need of design overhaul as its cabin feels dated in comparison to even small hatchbacks.

The Kia Carens will have the longest wheelbase in its segment as told by Kia during the global unveil, this means that the rear passengers will have better legroom compared to other cars in this segment.

Whenever there is talk about a 6 or 7-seater car, there’s talk about the third row of passengers and mostly every car fail in this area as the 3rd row of seats are mostly useful for kids rather than adults. Now, let’s compare the dimensions of its competition:

As we can see that the longest wheelbase among these cars is of the Hyundai Alcazar whereas the Maruti XL6 has the shortest wheelbase. So, the Kia Carens will have a wheelbase of more than 2760mm which in itself is quite awesome and as Kia mentioned that they developed the Carens with focus on 3rd row seating. Talking about the other dimensions according to the information we gathered from the official Kia Carens website the car will be slightly shorter than 4550mm in length and will have height of more than 1680mm, thus proving that the Carens will be longer than the Alcazar and the XL6 but it won’t be longer than the Innova Crysta that’s a given, while its height will be more than the Alcazar but maybe less than the XL6 and Innova Crysta. More-over, judging by the photos, we can clearly see that the width and ground clearance will be on par with the competition but the tires on the Carens look a bit small and we guess the tire size will be either 16 or 17-inches and won’t be the same as the Alcazar’s class-leading 18-inchers.

Let’s compare some of the important features on offer in the top-spec variants of these MPVs:

These features are the most in demand features and clearly the Korean twins are way ahead than the competition with many other features like air purifier, electronic 2nd row seat tumble and blind view monitor in the Alcazar making them better than their rivals and now for the Safety features:

As we can clearly see here that in terms of safety features too the Korean twins are leading and all these features are standard across all models in the Alcazar and Carens which shows their commitment towards safety, while the Maruti lags in this department with just 2 airbags while a hatchback like the Hyundai i20 offers 6 airbags in its top-spec variant and still costing less than the XL6.

Since Kia has not yet revealed anything about the engines on the Carens we will reserve the verdict on the engines for later when we get our hands on the Carens for a full review but according to all the information compared above one thing is certain that the Carens will be a disruptor of sorts in the MPV segment and will it be able to garner sales numbers will be seen in the future but this car from Kia is certainly the one to look out for by the rivals as it flourishes above its rivals in many departments and with the Indian buyers getting more mature, prioritising design and features too the established rivals need to up their game to be of relevance. If Kia can price the Carens in the Rs. 11-14 lakh ballpark, it will certainly be a tempting product from them.