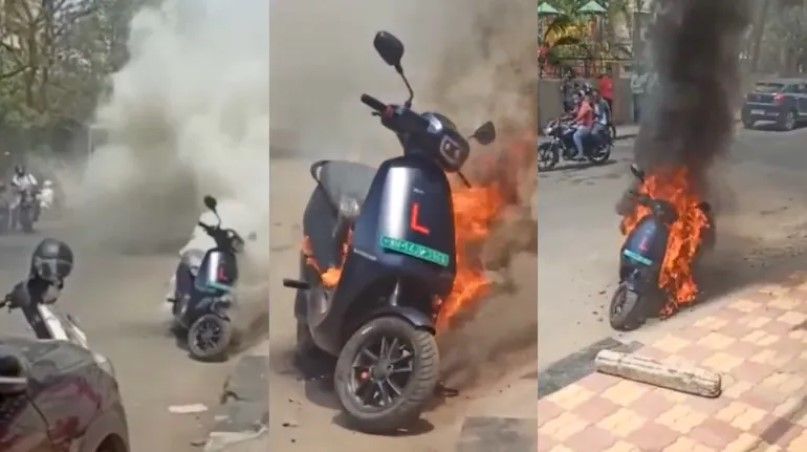 A video of the Ola Electric Scooter is going viral, wherein, the E-scooter is on fire. The incident is from Pune where Ola Electric S1 Pro can be seen catching fire on the road due to battery overheating. The same day, another report came from down south, Tamil Nadu, of another e-scooter catching fire leading to two casualties in Vellore.

All of this has led the EV makers and their battery suppliers to explore various technical solutions so that the risk of EVs catching fire can be eliminated. While Ola Electric itself is investigating to find out the root cause of the problem, other EV companies plan to work together with component and battery manufacturers to get to the bottom of this very serious safety issue as this could literally flatten the sales chart for EVs in India.

Anand Kabra, MD of Batrixx, said, “An ideal situation would be to always keep the battery cold and at low temperatures. However, India being a low-cost market in the two/three-wheeler segment, companies are still not ready to invest in active cooling solutions.” Battrix is a battery pack supplier for electric two-wheelers.

And even if the companies are not ready for active cooling solutions, as per experts there are other means to minimize the overheating of batteries. A high degree of safety redundancy can be built into battery designs through fuses and other ways to check thermal runaway and ensure that increase in temperature of one cell does not have a cascading effect over other cells. Also, battery makers should move away from cobalt, an unstable material that can cause a fire.

Kabra added, “We might move to sodium and other technologies in the near future, where the risk of fire or thermal runaway gets eliminated or largely reduced,”

Experts also suggested the technique of battery swapping which can also help in reducing the risk of fire.

Chetan Maini, Chairman of Sun Mobility, which already has partnerships with several EV makers and exploring the battery swapping technique, said, “In battery swapping, the battery can be cooled down when it’s charged outside of the vehicle. There is a stringent regulatory framework in place for battery makers. A lot more testing is required as capacities scale up,” he said. “The challenge is for two and three-wheelers.”

Meanwhile, the EV makers should recall models involved in firing incidents and start testing and exploring options to minimize the safety issues and sort out battery-related problems.