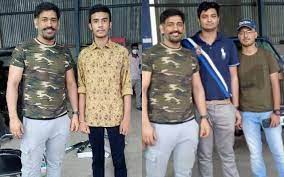 Having a cool personality on the cricket ground, Ms Dhoni also has a big crush over the car and bikes. He has an eye-catching Car and bike Collection in his garage. Recently, A news went viral in which MS Dhoni can be seen with some of his friends in the garage, There were rumours that the garage has seen in the image which related to dhoni, also dhoni can be seen with Roll Royce Silver Wraith II in the same garage. 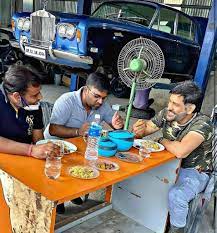 In this, the Roll Royce is being repaired and dhoni is having lunch with some of his friends. After the news went viral, his fan making an assumption that the Roll Royce must be purchased by Ms Dhoni.

To get the full picture of the news, We sought to dig into it and we found a video in which we can get know the reality behind the viral news, In this video, a mechanic himself came up, and shared his experience with the captain cool. The video has been uploaded by the Followup youtube channel. In this video, the Machanic Ratnesh Kumar says, that the Former Indian Caption came around 12 PM and he left the workshop at around 2 am. The mechanic did not know that the car he was working on was a Rolls Royce. 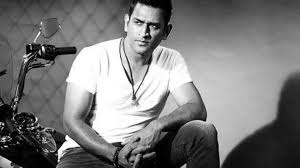 He mentions that the Rolls Royce Silver Wraith was there at the workshop for general maintenance and suspension work. He says MS Dhoni was very friendly with the staff and he also shared information regarding the car with the staff. As seen in the pictures that went viral on the internet earlier, Dhoni also ate food with the owner at the workshop. The mechanic seemed very happy and excited while sharing his experience. He says, Dhoni even posed for pictures with the mechanics and even the children. 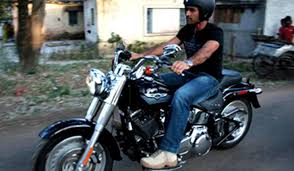 MS Dhoni came along with the car and he spent the whole day at the garage. He also helped the mechanics with some of the tasks and also checked the condition of the body when the car was lifted. This is not the first time, Dhoni has visited this garage, he had come before with his Hummer SUV. MS Dhoni is an auto enthusiast and he has a collection of several cars and motorcycles in his garage. The Silver Wraith II is one of his recent possessions. The car gets a unique Blue paint job and is powered by a V8 engine paired to an automatic transmission. 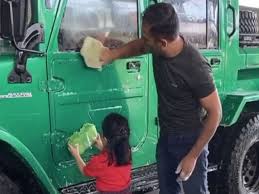 Other than this, MS Dhoni has a 1969 Ford Mustang, Pontiac Firebird Trans Am in his vintage car collection. MS Dhoni has a special love for SUVs and that is very evident in the cars that he owns. The has a resto-modded Nissan 1 ton pickup truck, one of the most powerful SUV Jeep Grand Cherokee TrackHawk, Hummer and so on. The Cherokee TrackHawk is powered by a 6.2 litre Hellcat engine generating 707 bhp and 875 Nm of peak torque. Other than cars and SUVs, Dhoni has a collection of motorcycles too. He owns Confederate Hellcat X132, Yamaha RD350, Harley Davidson Fatboy, Kawasaki Ninja ZX 14R, BSA Goldstar, Ninja H2, Yamaha FZ-1 and many other vintage and modern motorcycles in his garage.