Volkswagen Virtus has set a new record. The record has been given to EVM Motors & Vehicles Pvt. Ltd. in Kerala for delivering the most single model sedans in a single day by any dealership in India. On June 9, 2022, the Volkswagen Virtus was introduced in India. The all-new Volkswagen Virtus was launched on June 9, 2022, and it would not be wrong to say that this car has garnered a lot of attention. The car enthusiasts, critiques, and daily commuters are in love with the Volkswagen Virtus. Well, the popularity of this car can be measured by the fact that a record 150 units of the VW Virtus were delivered in a single day by a single Volkswagen dealer in Kerala. This compact sedan has now entered the India Book of Records.

For delivering the most single model sedans in a single day by any dealership in India, the record has been given to EVM Motors & Vehicles Pvt. Ltd. in Kerala. On June 9, the vehicle was introduced in India, and since then, the corporation has been running massive distribution campaigns for the Virtus all over the country. Ashish Gupta, Brand Director, Volkswagen Passenger Cars India, commented on this noteworthy accomplishment as follows: "We are overjoyed that the new Volkswagen Virtus, the only model of a sedan to be delivered in a single day by a single dealership, set a national record at the "India Book of Records." We want to congratulate EVM Motors & Vehicles India Pvt. Ltd., one of our dealer partners, on this outstanding achievement. We would like to express our gratitude to all of our clients who contributed to this trip and helped us earn this recognition."

Volkswagen reported that since pre-orders for the Virtus were made available on March 8, 2022, it has received over 4,000 pre-orders. More than 200 Volkswagen Virtus cars have been supplied to consumers in Kerala alone since the model's launch. These include the deliveries made by Phoenix Cars Pvt. Ltd. and EVM Motors & Vehicles India Pvt. Ltd. 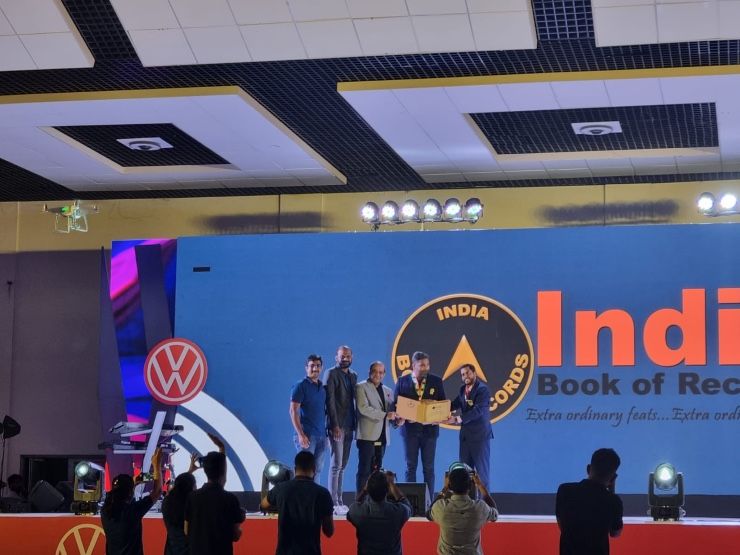 EVM Motors & Vehicles Pvt. Ltd's managing director, Sabu Johny, commented on the accomplishment by saying, "Setting a record with the new Volkswagen Virtus at the India Book of Records is something to be proud of. It demonstrates the love, trust, and extraordinary response by our customers for Volkswagen with 150 customer deliveries in one day. We look forward to bringing many more Virtus to Kerala and welcoming more satisfied Volkswagen family members."

Price ranges for the Volkswagen Virtus range from 11.22 lakh to 17.92 lakh (ex-showroom, India). The tiny sedan is available with two turbocharged petrol engines: a 1.0-liter TSI and a 1.5-liter TSI unit. The former is available with a 6-speed manual and an automatic transmission, while the latter comes standard with a DCT automatic. The Virtus also has a number of intelligent amenities, including a sunroof, heated front seats, wireless charging, stylish alloy wheels, Apple CarPlay, and Android Auto.