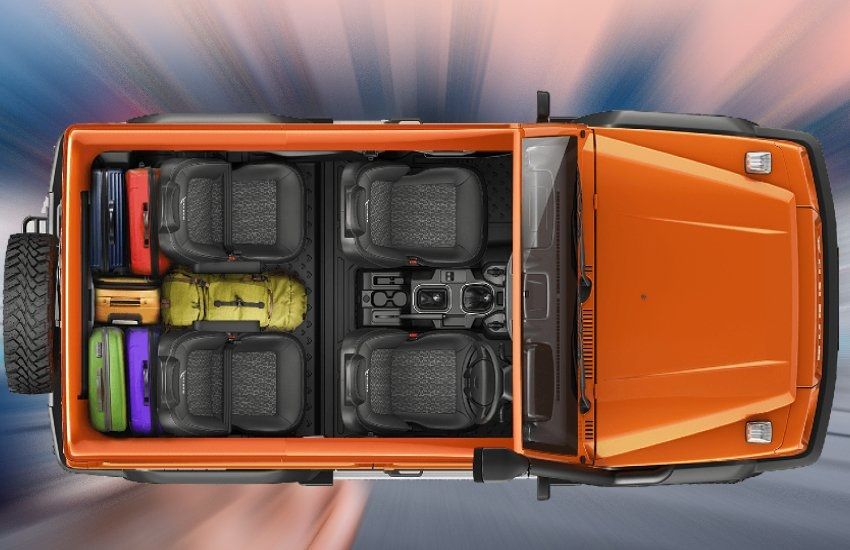 Since the 3-door variant doesn’t appease everyone, the company will launch the 5-door Gurkha SUV near the festive period in 2022. Here are the details on the upcoming car from the company:

The new 5-door Gurkha will be based on the same ladder-frame chassis of the 3-door version but it will be stretched out to accommodate extra passengers. The overall shape of the new car will remain the same as the regular one, having the similar boxy silhouette. It will have a re-designed rear glass area as well as a new design for the rear quarter. Its wheelbase is expected to be 400mm longer than the 3-door variant with all other exterior design elements to be borrowed from the current car including the bold front headlamps with circular LED DRLs and the Mercedes G Wagon-esque front grille as well as the prominent factory fitted snorkel on the front fender.

As evident from the latest spy-shots, the new 5-door Gurkha will have a new seating layout with both 6 and 7-seat layouts to be offered. The 6-seater version will get captain seats for the middle as well as the third row while the 7-seater version will get bench seat in middle and captain’s seat in the third row, which is unique design from the company as we don’t have this seating layout in any current car on sale in India, how-ever if this layout means more legroom and headroom for the third row passenger is to be seen but, Force Motors has already added a USP to its upcoming SUV. The dashboard and other interior features are expected to be retained from the 3-door sibling of the car which comes with a decent list of features like 7-inch touchscreen infotainment with Android Auto and Apple CarPlay, dual airbags, rear parking sensors, central locking and power windows. A rear parking camera is expected on the 5-door version but it is to be seen at the time of launch.

The features are not the selling point of the Force Gurkha, which is known for its rugged looks and off-road capabilities which can put to shame even SUVs of higher segments.

The 5-door Gurkha will continue to be powered by the Mercedes sourced 2.6L diesel engine seen on the 3-door variant which produces 91hp and 250nm of torque but these figures may rise due to the added weight of the 5-door version of the SUV. The SUV will continue using the 5-speed manual gearbox and have a 4-wheel drive system. In terms of off-roading prowess, the new Force Gurkha 5-door will get all the bells and whistles like the manual locking front and rear differentials, independent front suspension, low-range mode and others with fine tuning done to cater to the added length and weight.

The 3-door Gurkha rivals the Mahindra Thar and with Mahindra also testing its 5-door Thar variant, the new, stretched out Gurkha too, will rival the elongated Thar, though the competition will get tough when Maruti Suzuki Jimny 5-door will launch in the near future with Maruti already announcing its plans to launch the SUV in India.

In terms of pricing, the 3-door Force Gurkha starting price is Rs. 13.59 lakhs and the 5-door version, is expected to command a premium of Rs. 1-1.5 lakhs.