Hyundai Ioniq 6 is another step from Hyundai towards their unrelenting march towards the dominance in the mainstream EV market. Hyundai Motor Group is, well we can say, the unsung hero in the domination of the mass EV market in America and abroad. If we talk about India specifically, Hyundai hasn’t left a mark yet, but the success in the markets abroad will definitely make their foray into the Indian market a swift victory. And all this while, yes, Tesla is being credited and in the limelight, but silently Hyundai is encompassing the market. Hyundai Motor Group surpassed Ford, Nissan, and Volkswagen to claim the No. 2 spot in the U.S. electric vehicle market earlier this year, thanks to well-built, well-equipped, and reasonably priced models such as the Hyundai Ioniq 5 and Kona Electric, the Kia EV6 and Niro EV, and the newly launched Genesis GV60. To be sure, Hyundai Motor Group is still far behind Tesla in terms of overall EV sales. However, there is no denying the company's lofty ambition in the segment.

And the ambitious goals of Hyundai can be reviewed by the fact that the Hyundai Ioniq 6, is all set to go on sale in United States in the first half of 2023. That in itself is another step in Hyundai's relentless march to launch more than 30 EV models by 2030, with a target of 3 million electric vehicle sales per year.

In addition, the company is investing $5.54 billion in its first dedicated EV factory, which will be built near Savannah, Georgia. The factory will be designed to produce up to six EV models for the US market by 2028, including the yet-to-be-seen Hyundai Ioniq 7, a roomy three-row electric SUV expected in 2024, as well as a Kia EV pickup expected in the first half of 2026.

But first, let's know a little more about the Hyundai Ioniq 6. Simply put, the Ioniq 6 is the production version of the 2020 swoopy Prophecy concept. Under the hood is Hyundai Motor Group's impressive E-GMP EV platform, which also underpins the Hyundai Ioniq 5 and Kia's EV6 and features the company's fast-charging 800-volt electrical architecture. Hyundai hasn't revealed any details about the powertrain, but it's safe to assume the Ioniq 6 will have the same electric motor and battery pack configurations as the Ioniq 5. That means a rear-drive model with a 225-hp, 258-lb-ft motor powered by either a 58-kWh or a 77.4-kWh battery pack, as well as an AWD model with the larger battery pack and a 99-hp, 188-lb-ft motor at the front axle, for a total output of 320 hp and 446 lb-ft.

The Ioniq 6 was supposed to share the EV6's wheelbase, according to Hyundai Styling Group head Simon Loasby, but the designers fought hard for the extra inches to improve the car's proportions.

Another significant benefit of the wheelbase extension was more space for rear passengers. Although it is 5 inches shorter overall than a Honda Accord, the Ioniq 6 has almost limousine-level rear knee- and legroom, despite the fact that the battery pack means the seat bottom is closer to the flat floor than in an internal combustion engine vehicle. It would not be wrong to say that the design elements of this car are cool and there is some sort of historical inspiration which the head of global design, SungYup Lee talks about in length. According to Hyundai's head of global design, SangYup Lee, one of the original names considered for the Ioniq 6 was Streamliner. "We decided on Ioniq 6, but I always see a Streamliner badge underneath," Lee jokes, referring to images of iconic wind-cheating cars such as the Stout Scarab and Phantom Corsair from the late 1930s and the 1947 Saab 92 during the media preview for the new Hyundai. "It's a simple, reductive design," Lee says of the Ioniq 6's slick profile, which includes a low hood, cab-forward stance, and swooping greenhouse. "It's a pure volume, a proportion you cannot do with an internal combustion engine vehicle."

It also appears to be a wind cheater: Every surface of the Ioniq 6 has been wind tunnel-honed to achieve a claimed drag coefficient of 0.21, making the Ioniq 6 as slippery as a Tesla Model 3. There are numerous cool details. The top element of the rear end, which resembles the whale tail spoiler on a vintage Porsche 911, has a pixel light graphic that rolls over onto its upper surface. The way the rear fenders flow inward toward the upper surface of the trunk lid is reminiscent of forms seen on old 911s and a Bangle-era BMW 6 Series.

Lee's team tried everything to get rid of the shark-fin antenna on the roof, but when they discovered they couldn't due to technical constraints, they made it out of a dark, translucent material that allows you to see the electronic hardware inside. However, the relentless pursuit of the streamliner ethic has resulted in a few awkward design details, such as the cutline in the C-pillar, which was an inevitable byproduct of the need to have a trunk lid that extends to the top of the rear fenders.

The rear door cutline also extends into the roof side rails to allow for the framed door uppers, which improves rear entry and egress. They're minor quibbles that won't be noticed on a dark-colored car. The Ioniq 6 has a commanding presence in person. The spacious, well-equipped interior of the Ioniq 6 has a premium feel that makes Volkswagen's ID4 interior look cheap and all Tesla cabins look spartan. Variable ambient lighting is standard, but the light is reflected off the surfaces of the door panels, so the light sources are hidden. There is no Hyundai logo on the steering wheel, just four pixels that change color when you use voice activation and green when the car is charging. The digital instrument panel has a 12.0-inch display, and the infotainment system has a second 12.0-inch touchscreen above the center console. Because America will have traditional rear view mirrors rather than cameras like other markets, there will be no screens on the wings that flare out at either end of the dash. Both interior trims will be available in a variety of sustainable materials, including fabrics made from recycled plastics, carpets made from recycled fishing nets, and leather dyed with flaxseed oil. 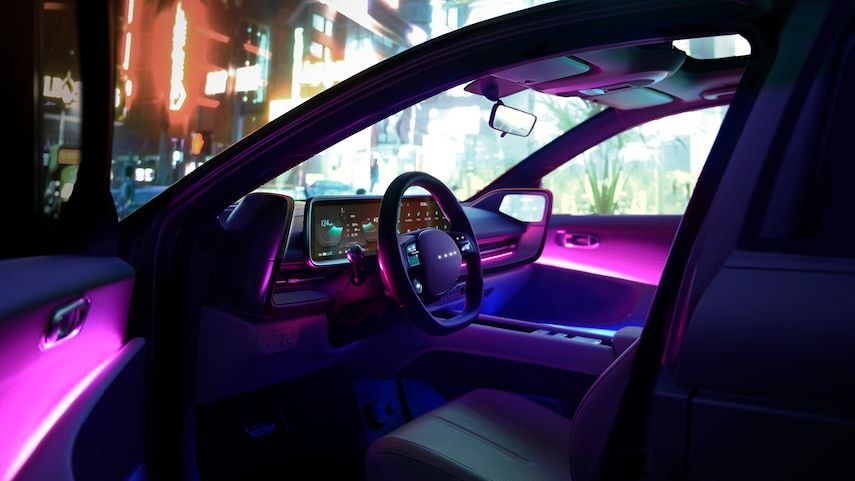 Hyundai offers a total of 12 exterior paint colors on the Ioniq 6, including gold and green matte finishes with bamboo charcoal pigments, though it's unclear how many of these will be available in the United States. The Ioniq 6 will be equipped with either 18-inch wheels and 225/55 tyres or 20-inch wheels and 245/40 tyres, depending on the model. According to Hyundai sources, the Ioniq 6 will be priced lower than the smaller Tesla Model 3 when it goes on sale next year, implying a starting price of less than $48,000 for the base rear-drive model. Hyundai regards Tesla as a luxury brand, which is a reasonable assumption given its pricing and customer perception in the United States. However, the Ioniq 6, which is a Model 3 and Model S tweener in terms of overall size but has a roomier back seat than either, appears to be just as upscale as either of Elon's sedans.