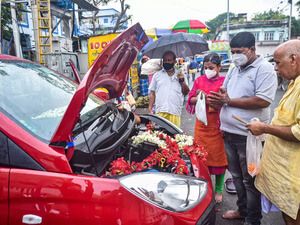 Retail sales of passenger vehicles and two-wheelers in the festive season's initial phase appear relatively dull pan-India, in comparison with record property registrations in Mumbai. A chronic chip shortage and tepid demand for commuter motorcycles is causing a rare shrinkage in an otherwise booming consumer economy.

According to industry sources, passenger vehicle makers retailed around 85,000 units, versus 1,75,000 units last year. Two-wheeler retailing may have declined about a quarter through Navratri and Dussehra.

Vahan registration data, sourced from the Federation of Automotive Dealers Association (FADA), showed Navratri retailing declined 17% on-year to 2.55 lakh units in the two-wheeler segment. Sales of both, passenger vehicles and tractors, shrank more than a fifth.

Vahan data would cover 85% of the Indian automotive market. There is a lag of about a couple of weeks between actual retailing and representation on the Vahan site, which is updated on a retrospective basis.

Vinkesh Gulati, FADA president, said that while auto dealers were preparing themselves for a good Navratri season, sales have tailed off.

"On the two-wheeler front, we have seen very weak enquiry levels. Most of India is witnessing at least 25% contraction from last Navratri due to the impact of high vehicle acquisition costs and high fuel prices," Gulati said. Costs in the affordable bike segment have climbed 30% in the past two years.

Passenger vehicle stocks at the beginning of October stood at 1.7 lakh units, almost half of the normal levels. Shortage of models has led to lower del ..lower deliveries.

Shashank Srivastava, senior executive director, sales and marketing, Maruti Suzuki, said the 2021 festive season has been "unique." While there is good underlying demand reflected in good bookings and enquiries, probably due to continued customer preference for personal mobility, continued supply constraints might be hurting retail sales, he said. ..What is worrying is that with no certainty of deliveries on the auspicious days of Diwali and Dhanteras, the booking momentum has started slowing, as prospective buyers don't want deliveries in December.

"Of late, even the bookings are tending to decline as customers become wary of uncertain delivery periods and a realisation that deliveries against new bookings will not happen in the festive period," added Srivastava. Tepid Start

The dealership fraternity said the passenger vehicle entry-level category is not showing enough traction in spite of good schemes. "While there is demand in the middle and high segments, there is a huge shortage of vehicles due to semiconductor issues," added Gulati.

IHS Markit, a global automotive consulting firm, forecast a weak start to the festive season in the third quarter on account of semiconductor shortages.