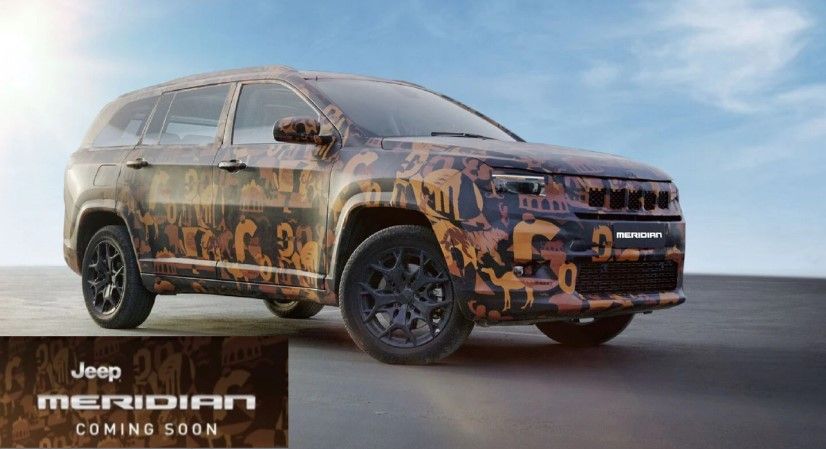 Jeep Meridian is the name confirmed for the seven-seater Jeep Compass SUV, which was being extensively tested for the last few months by the company in India. As, we had earlier mentioned in our news report, the 2022 Jeep Meridian is one of three new Jeep SUV in 2022 for the Indian Market.

The company has revealed that from the list of over 70 names, the Meridian SUV name has been picked for this big Jeep, which will be a Made in India car, thus it will be priced on par with its rivals and is slated for launch later, this year.

The Jeep Meridian has been rigorously tested by the company and according to Jeep India, the SUV had completed a run from Kashmir to Kanyakumari, flawlessly and proved an able on and off-road vehicle, despite the varying climate and road conditions of the Indian Peninsula.

The 2022 Meridian SUV will carry forward Jeep India’s image established by the Jeep Compass SUV and its name signifies the line which passes through India; thus, the company hopes that this new car from them will join the company to Indians and help in expanding its reach.

The Jeep Meridian may well be launched in a 6-seat variant as well, due to the increased demand for those captain seats in India, but that is to be seen upon its launch. Jeep is part of the bigger, Stellantis Group, which owns the Jeep and the Citroen car brands in India, with plans to launch new car brands in the future.

Talking about the design, the Jeep Meridian SUV is based on the Compass and will not be entirely different from that car in terms of design. It will have different headlights and taillights, new front and rear bumpers and also new alloy wheel designs.

Apart from these, the car will be similar to its smaller sibling, while inside the cabin is where the difference is more pronounced with the addition of the third row of seats. The company will offer premium upholstery and new colours to uplift the cabin feel. The features list is also expected to include few more bells and whistles over the Compass.

Albeit, the engine details have not been officially revealed, but the Meridian is expected to carry the 2.0L, diesel engine seen on the Compass SUV but in different state of tune, while there are reports that the company may also offer the Meridian with a mild-hybrid system as well.

The transmission duties will be handles by an 8-speed automatic gearbox and the car will definitely get the company’s famed 4-wheel drive system.

The Jeep Compass price in India is Rs 17.79 lakh to Rs 29.34 lakh, but expect the Jeep Meridian price at around Rs 35 lakh. This will make this premium SUV a direct rival to the MG Gloster starting price Rs 30.99 lakh and the recently launched 2022 Skoda Kodiaq starting price Rs 34.99 lakh.