Tata Safari SUV will be the latest Tata car to get a Dark Edition, with launch of this new variant planned for January 17. The Safari Dark Edition will receive a host of cosmetic changes to both the exterior and interior. 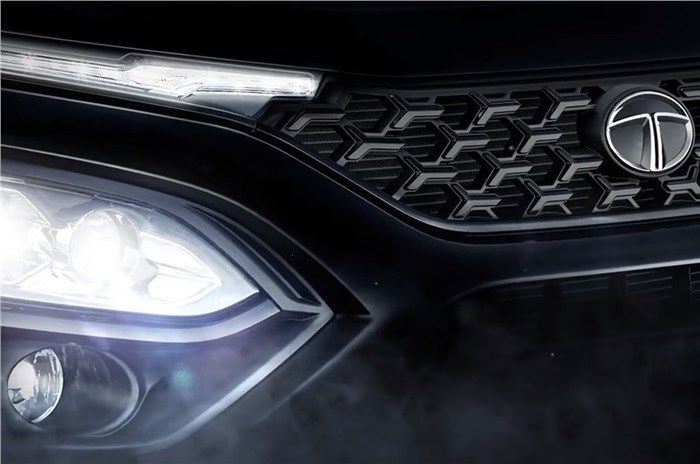 The same theme will continue for the interior, as we can expect an all-black cabin with blacked out dashboard layout and black colour on the seat upholstery for the SUV, which will be in stark contrast to what the standard, adventure and gold edition models offer as the Safari has white or beige interior theme in those variants for that added premium-ness. How will this new all-black treatment will look in the new Safari is to be decided for when the variant is launched but it will make the cabin feel a tad-bit less airy due to less light reflection.

The Safari Dark Edition will be offered in the XZ and XZ+ trims as is the case with other dark edition models of Tata, thus it will get all the bells and whistles on offer in the flagship SUV of the brand like the 8.8-inch touchscreen infotainment system with wireless Apple CarPlay and Android Auto, 7.0-inch semi-digital instrument cluster, a panoramic sunroof, wireless phone charger, premium-JBL sound system and leatherette upholstery for the seats.

Since this will be a mere cosmetic update, the Safari Dark edition will carry the same 2.0-litre, turbo-diesel engine, which makes 170hp and 350nm of torque. It will also continue to offer the 6-speed manual and the Hyundai sourced 6-speed torque convertor automatic transmission options.

The expected Tata Safari Dark Edition price is Rs. 20-21 lakhs with it being offered at a slight premium over the standard trims. The Safari continues to rival other three-row SUVs in this price bracket like the MG Hector Plus, the Hyundai Alcazar and the latest entrant the Mahindra XUV700.

Tata Motors is ready to launch the petrol variants of the Safari and Harrier with test mules for both seen recently. These SUVs will get the in-house developed, 1.5L Revotron petrol engine derived from the 1.2L petrol unit of the Nexon with more than 150hp power output. This will add more sales numbers to the already popular SUVs from the Tata stable.