Audi has launched the new 2022 Audi Q7 facelift in India at starting price of Rs. 79.99 lakhs. Audi has brought back the new Q7 facelift after its earlier model was stopped due to the BS6 regulations in 2020. The company worked to make the SUV BS6 compliant and as a result has ditched the diesel engine totally from the line-up. 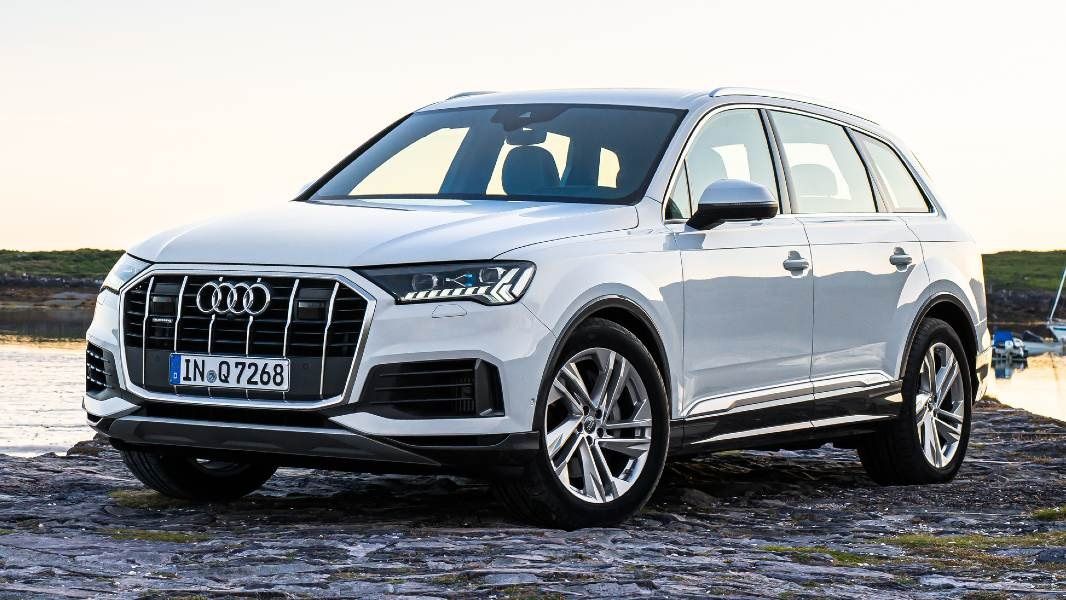 The Q7 is back after a hiatus of nearly two years, since it was discontinued in the run up to BS6 emission norms in April 2020. The facelifted Audi Q7 gets an exterior makeover, a completely revamped interior and, most importantly, makes the switch to being a petrol-only SUV and will continue coming to India through the CKD route.

Changes to the Exterior:

The Audi Q7 facelift that has come to India is the same model that was revealed by the German company in 2019 and has that new Audi design language with even larger front grille with 6 vertical chrome strips, re-designed Matrix LED headlamps and new LED DRLs. The front bumper is more muscular with large air-intakes on the sides in place of the fog lamps.

From the side the big SUV seems the same apart from new alloy wheel design and chrome surround for the windows. Though the new car is longer by 11mm in length, one may not notice this subtle change which will however mean more legroom inside. The rear is new-look however with a big chrome strip running the entire width of the boot and it seamlessly integrates with the new LED taillamps. The rear bumper too is updated slightly.

Changes to the Interior:

The company, may not have completely redesigned the exteriors, but they have done some major work to the Audi Q7 facelift interior which now looks way sleeker and more modern in its design. It now gets a 10.1-inch touchscreen infotainment along-with an 8.6-inch touchscreen panel for the climate controls. The luxury SUV continues with the upgraded, digital instrument cluster, called the ‘virtual cockpit’ by Audi and looks similar to its bigger sibling the Audi Q8. The Audi Q7 facelift 2022 continues to offer the 7-seat layout, which gives an upper hand over its rivals. The car also gets, features like, a panoramic sunroof, customisable ambient lighting, 4-zone climate control along-with safety features like 8 airbags, lane keeping assist, ESC and run-flat tyres among many others.

The new Audi Q7 facelift has a single 3.0L, V6 turbo petrol engine which makes 340hp of peak power and 500nm of peak torque while mated to an 8-speed automatic gearbox. The engine comes with the iconic Quattro all wheel drive system as standard, giving power to the 4 wheels as well as comes with driving modes as well. The 2022 Q7 continues using a mild-hybrid system which enhances efficiency of the engine.

The BMW X5 continues to offer three models, which are less expensive than all other of these cars but the Audi and Volvo SUVs are the only ones to offer 7-seat layout. Another thing to note is that both BMW and Mercedes offer their cars with diesel variants too, unlike the other two companies.