Norton Motorcycles has finally unveiled its new re-engineered motorcycle, the V4SV. The motorcycle will come along at a pricetag of about INR 41.40 Lakh.

Norton Motorcycles are finally back in the game as they have unveiled the production-spec V4SV, which has been significantly re-engineered and is also the first product to come out of the British manufacturer's stable after the takeover by local company TVS in 2020. The V4SV is priced at 44,000 Pounds (approximately Rs 41.40 lakh) in the United Kingdom (without including customs and import duties). Orders placed before TVS purchased the British firm will be given precedence, according to Norton.

With the V4SV, Norton has begun its new era with a supersport motorbike, and the V4SV is a handsome machine! The V4SV is a unique take on supersport design in that, unlike other supersport motorcycles with sharper profiles, cuts, and creases, the V4SV has a smoother flowing profile and appears to be well-rounded. Carbonfibre parts, such as the lower half of the fairing, the front mudguard, and the 15-litre fuel tank with Kevlar reinforcements, are available in two colour options: Manx Silver and Carbon. The Carbon option, in particular, features carbonfibre bodywork and BST wheels made of carbonfibre.

The Norton V4SV is powered by a 72-degree, 1200cc liquid-cooled four-valve engine that produces 185bhp at 12,500rpm and 125Nm at 9000rpm. The motorbike is built on an aluminium tubular frame that is suspended from both ends by Ohlins completely adjustable suspension — Ohlins NIX 30 forks in the front and a TTXGP custom monoshock in the back. Brembo provides the braking system, which includes twin 330mm front discs with radially mounted Brembo Monobloc callipers and a 245mm rear disc. The rake angle, steering offset, and swingarm pivot are all adjustable on the V4SV. The swingarm is a single-sided braced and underslung section, and the motorcycle weighs 193 kg without fluids.

The Norton V4SV comes equipped with a 6-inch colour instrument cluster with brightness adjustable and a rear-view camera, as well as a quickshifter, lean-sensitive traction control, keyless ignition, and three engine modes to select from: wet, road, and sport. 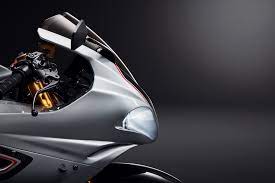 Given that TVS is the parent corporation, the chances of seeing the Norton V4SV are minimal but not impossible. However, the wait will undoubtedly be considerable. Or, who knows, perhaps we'll be surprised?