The 2022 Toyota Camry facelift starting price is Rs. 41.7 lakhs, as it was launched in India. Toyota has brought the facelifted model to India this year after it was unveiled globally last year. The 2022 facelifted Camry Hybrid gets a few cosmetic changes to the design as well as the features list, with no mechanical changes’ underneath, as this is a mild update and not complete generational change for the sedan. 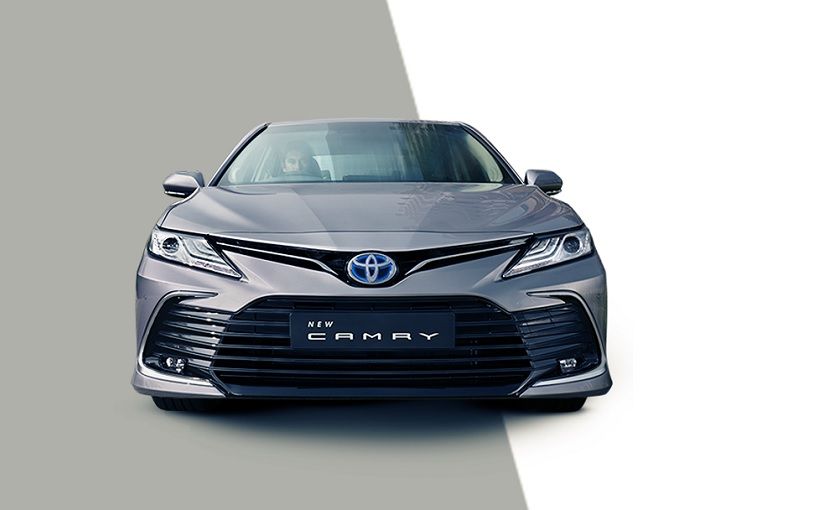 Toyota launched the 8th-gen Camry in 2019 in India and the car is based on Toyota’s TNGA (Toyota New Global Architecture) platform, the sedan got a bold and sleek new design language from the Toyota while maintaining the aesthetic of the car and the facelifted model is also pretty much the same.

The Camry facelift gets Toyota’s new grille design with a chrome strip in it as well as a redesigned front bumper, with a larger air-intake, with lesser chrome accents than the earlier model. The fog lamp housing is re-designed too with more aggressive look and surrounded in chrome, while the headlights retain the same look but the LED taillamps now get new dark inserts in them. From the side it retains its looks, how-ever it gets alloy-wheel designs.

The interiors of the 2022 Camry are also unchanged except, for the addition of the floating 9-inch touchscreen infotainment screen which replaces the earlier 8-inch unit that was integrated into the dash and it also has Toyota’s latest software for faster performance along-with Apple CarPlay and Android Auto. Due to the new screen the central air vents are also re-positioned under the screen.

The Camry facelift is well equipped in terms of features and safety, as it has features like a sun-roof, three-zone climate control, wireless charging support, premium, 9-speaker JBL sound system, electrically-reclining rear seats, electrically operated sunshades for the rear passengers, ventilated front seats having a memory function on the driver’s seat, a heads-up display unit, 9 airbags and many other safety and comfort features.

The new Camry continues with the 2.5L petrol engine making 178hp which is mated to a 160kW battery and a permanent magnet synchronous motor, for a combined power output of 218hp, whereas the transmission duty is done by the CVT gearbox. Due to the hybrid system, the Camry has a claimed mileage of 23.27kpl, which is very good for a car its size and in this segment.

The Toyota Camry hybrid prices has been increased by Rs. 50,000 from the earlier price of Rs. 41.2 lakhs. The new Camry doesn’t have any direct rivals in the hybrid premium-executive sedan space but it will continue its rivalry with the Skoda Superb starting price Rs. 32.85 lakhs in this segment even though they have a significant price difference.

Toyota is looking for a strong start to this year with further launches planned like the Hilux pick-up truck and the Belta sedan, a re-badged Maruti Ciaz, and a few other vehicle launches also planned for this year.