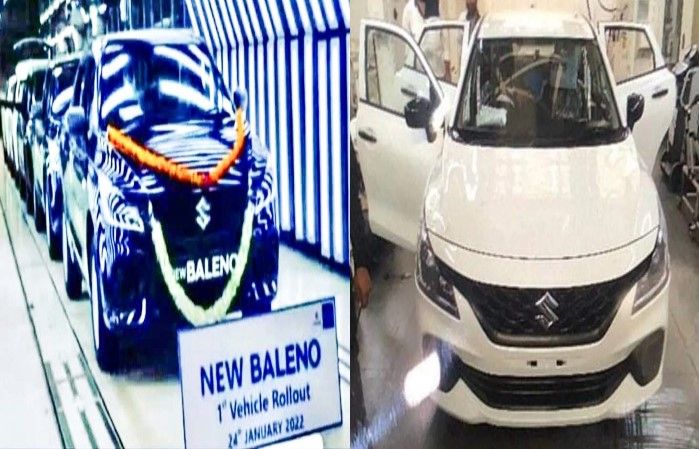 The 2022 Maruti Suzuki Baleno will launch in February and many Maruti Suzuki Nexa dealers have started accepting bookings for the new Baleno. The official bookings are reported to start from 1st February but some dealers have unofficially opened the bookings at different booking amounts. The production of the 2022 Baleno had started on 24th January in the company’s Gujarat plant, where the new Baleno will be manufactured and the dealer training will also start from 1st Feb. according to reports.

The all-new Baleno is the first new car launch from Maruti even-though they had launched the Maruti Suzuki Celerio CNG starting price Rs. 6.58 lakhs in January. The new Baleno will officially start, what promises to be a big year for Maruti Suzuki in terms of new car launches with 4 new vehicles and couple of facelifts planned for this year.

We had already covered quite a few things about the new 2022 Maruti Suzuki Baleno and here’s a recap of what we know so far:

The 2022 Baleno will have a new design which will differentiate the car in terms of looks but will retain the overall silhouette of the outgoing model. Almost all body panel of the Baleno are re-designed and it will be wider than the present model.

At the front it will get a bigger and wider grille which looks squarish in shape, also there are new L-shaped LED DRLs within wraparound LED projector headlamps. It gets a re-profiled front bumper with circular fog lamp housing. The rear too has undergone changes in terms of new taillights and a re-designed bumper, though Maruti is expected to offer new alloy wheel design on the car.

The updated Baleno has a completely new dashboard layout, which now comes with a larger, free-standing touchscreen infotainment system. The new infotainment screen is expected to be 9-inch in size and will run on Maruti’s latest OS with Android Auto and Apple CarPlay, how-ever if they are offered with wireless connectivity is yet to be seen. The other features in the new Baleno are a heads-up display, connected car features, flat-bottomed steering wheel with mounted controls (borrowed from the Swift) and many other.

The 2022 Maruti Baleno is expected to be high on safety as well, since it is based on a re-designed Heartect platform with upgraded stronger and thicker steel used in its construction. Also, Maruti is expected to offer the Baleno with 6 airbags, which will be a first for any Maruti car in India along-with, other safety tech like, ABS with EBD and even ESC.

Expect the 2022 Baleno to be powered by the similar 1.2L petrol engine options as seen in the current car. The normal petrol engine produces 83hp power and 113nm of torque while the mild-hybrid one produces 90hp with similar torque figures. The same output is expected in the new Baleno as well with talks of a CNG version being developed for a launch in the near future.

In terms of transmission though, the new Baleno is expected to ditch the CVT automatic gearbox in favour of an AMT, to keep costs down, while the manual gearbox will be same.

Maruti expects the new model to continue this reign at the top with the overhaul given to the new car both inside-out and with the number of features being offered, expect the upcoming 2022 Maruti Suzuki Baleno price to be between Rs. 6.5-11 lakhs.