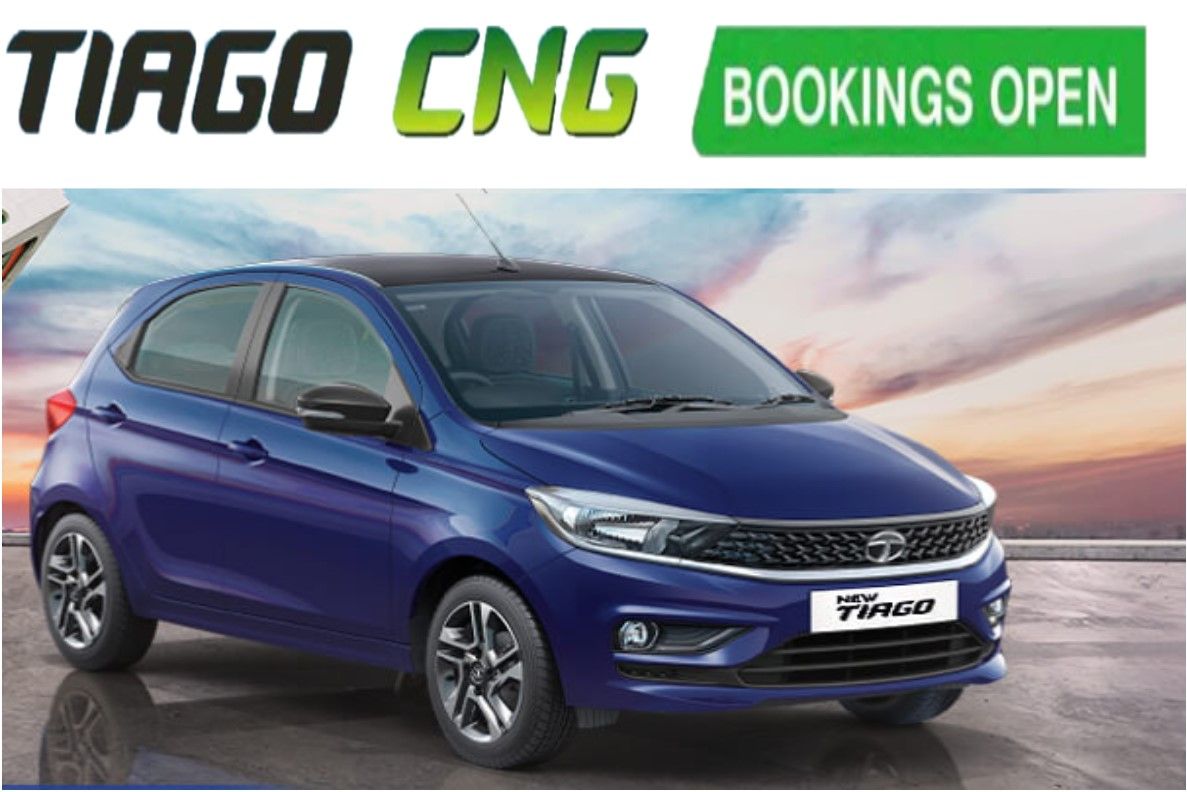 Tata Motors is on a roll as it had a record breaking 2021 and finished it with a bang by becoming the No-2 car maker in India in December. The company is not resting on the figures of last year though, with many more launches planned this year. Tata is planning to start this year with a bang by announcing the launch of its popular hatchback, Tiago in CNG guise this month. The company had earlier teased us with the Tiago CNG launch and is now ready for the onslaught with CNG variants for many of its models. Tata Motors dealers have already started unofficial bookings of the Tiago CNG even before its official launch, with booking amounts ranging between Rs.5-15 thousand. Tiago CNG will be the first CNG model from the company with the Tigor following it too. Both these cars will remain similar to their ICE siblings, cosmetically but the power and torque outputs may vary due to the addition of the factory fitted CNG kits. Currently both the Tiago and Tigor make 85hp power and 113nm torque via a 1.2L petrol engine mated to both manual and AMT transmissions. The CNG variants may come with only a manual at first but it is to be seen at the time of the launch however the price of the new Tiago CNG will be higher than the petrol-powered version by about Rs. 40,000.

The CNG segment is dominated by Maruti Suzuki and followed by Hyundai with both the companies offering CNG variants for many of their cars. Maruti is betting big on CNG as it considers it financially feasible and the future of mobility in India, unlike many other manufacturers which are focussing on the electric vehicle segments. Sales of CNG cars in India is constantly on the rise with the last year sales the highest ever for the CNG cars in the country. Maruti Suzuki dominates the CNG car market with over 80% market share and the rest is taken by Hyundai as there are no other major players in the CNG car segment. Maruti Suzuki posted over 70% growth in the CNG car sales in the past year as compared to the sales of 2020 and Hyundai posted mammoth gains with over 200% growth in sales figures for its CNG models.

Maruti Suzuki Wagon R remains the highest selling CNG car in India by a big margin as this tall boy hatch notched record sales numbers for its CNG variants. The Wagon R is followed by the Maruti Suzuki Ertiga which is India’s highest selling MPV and continues to bring in great sales figure for the company. The CNG variants of the Ertiga are particularly in demand by the taxi operators due to its frugal engine and great fuel efficiency. In the top 10 selling CNG cars list Maruti has 7 models which goes onto show Maruti’s dominance in the CNG space, how-ever things are about to get interesting with the entry of Tata Motors into the fray.

After the launches of the Tiago CNG and Tigor CNG, Tata will launch CNG models of its other popular cars like the Nexon SUV, Altroz and the highly popular Punch micro-SUV. The test mules of these cars being tested have been spied and they will be launched this year as the company wants a piece of the growing CNG market space.

Why CNG is gaining popularity?

CNG cars are raking in sales numbers because of a simple fact, low cost of ownership. Since fuel prices are touching new highs and the rising inflation too isn’t helping thus the buyers are looking towards the more feasible option of CNG, as CNG is cheaper than Petrol and Diesel giving better fuel efficiency. CNG cars are better for the environment too as compared to the fossil fuel powered cars and thus are appealing to families who prefer to keep the fuel costs in check and keep the environment clean. With the governments, globally pushing for an all-electric future, Indians are adopting an altogether different approach while steadily favouring EVs too. Will CNG cars be the mainstay in India in the future or will electric cars takeover from them? This is something that time will tell but right now it looks a bleak future for ICE cars everywhere.