The iconic Yezdi motorcycles are making a comeback in India in their new avatars, as the Mahindra owned, Classic Legends is looking for another successful revival of a legendary brand after the success of Jawa. Yezdi will officially launch 3 new bikes on 13 January, including the highly anticipated Roadking scrambler. The other two bikes are a Roadking derived adventure bike and a cruiser. 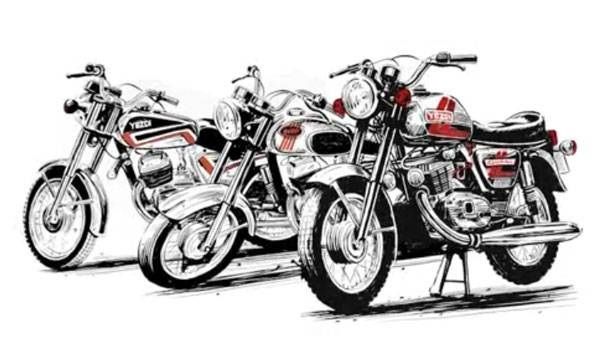 The company has kept everything quite secretive, how-ever they teased us with a video which showed glimpse of all the three bikes to be launched. Yezdi has been testing these bikes lately with spy shots available on the internet.

Yezdi motorcycles will have neo-retro styling on them, like many other bikes in the segment such as the Jawa and Royal Enfield bikes. This styling is a fad now-a-days with many brands opting for these styling ques as they have the iconic designs combined with the modern tech features. In terms of design the bikes will have round headlamps with spoke wheels on the Roadking and Adventure bikes but the cruiser will have cast alloy wheels as seen in the teaser. The bikes will have some similar features such as the wide handlebar, dual-purpose tyres and upswept exhaust. The Adv bike will have additional features such as knuckle guards, a big windscreen, engine and radiator guard and several other accessories like racks for cargo.

The Yezdi bikes will share many of their components with the Jawa bikes and thus will offer comfortable riding dynamics. The bikes will get normal telescopic front forks whereas the scrambler will get dual rear shock absorbers and the Adv will get a monoshock suspension. Dual-channel ABS will be offered as standard and the bikes will get both front and rear disc brakes also.

The engine in the new Yezdi bikes may be borrowed from the Jawa Perak whose 334cc engine makes 30.6PS power and 32.7nm torque while mated to a 6-speed gearbox. This is a reliable engine with ARAI fuel efficiency of 34kmpl in the Jawa Perak.

Next for the Classic Legends:

BSA Gold Star 650 next The Classic Legends is planning to strengthen its international market presence, as it has recently revealed that the iconic British motorcycle brand BSA will be revived with the BSA Gold Star 650 motorcycle currently being developed. The original BSA Gold Star bike was very popular bike in UK when it was offered with 350cc and 550cc units but now the Gold Star in its new avatar will get a bigger 650cc unit with initial launch in the UK and then judging by the response the company may decide on its India launch in the future.