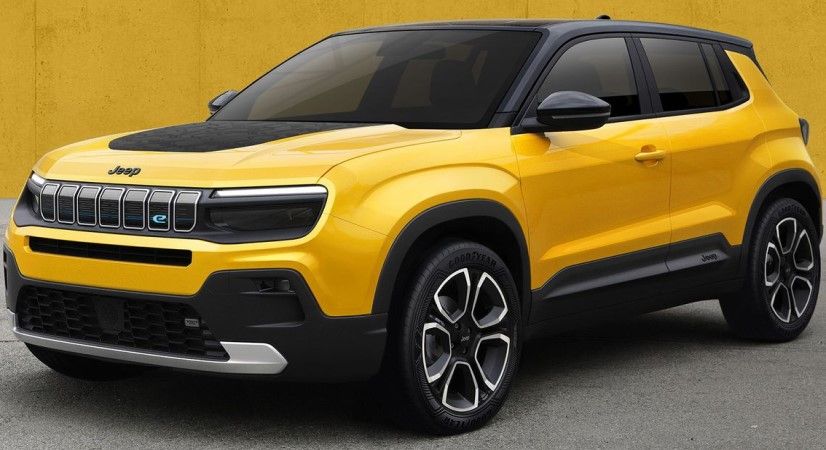 Jeep, the iconic SUV maker has showed first images of its first-ever electric SUV. The American brand is owned by Stellantis Group, which also owns iconic brands like Fiat, Abarth and Maserati. The company didn’t share any other details about its EV which is scheduled for launch in 2023.

Other Stellantis brands like Fiat and Maserati have unveiled their electric cars but Jeep has remained a slow mover in this category. The company has just released the plug-in hybrid variants of its popular SUVs, the Jeep Wrangler and Jeep Grand Cherokee.

This new Jeep EV would be in line with electric vehicles expansion plan of Stellantis, which was formed last year when French PSA Group merged with the Fiat Chrysler company. The newly formed multi-national auto conglomerate plans to electrify most of its auto brands to take hold of the still growing electric vehicle space.

This announcement of a new electric Jeep was expected due to the auto maker announcing all-electric versions of all its vehicles by 2025. The American car major would release plug-in hybrid variants as well as ‘zero-emission’ versions of its entire line-up. Jeep refrained from giving any other details about the first electric SUV and has also kept the name under wraps for now. More details will be released later this year as we near the launch of the EV.

Jeep Electric SUV: What we know?

Talking about the electric Jeep SUV, it will be based on the STLA platform and borrows many design elements from its ICE siblings. As seen from the images, the Jeep EV will have the iconic seven slat grille, albeit it will be covered in black plastics and will sport the ‘e’ badging to signify its electric nature. It has a large air intake in the front bumper to aid in the cooling of the batteries. The headlights are slim with a DRL on top of them.

From the profile, the SUV looks butch with plastic cladding and square wheel arches. It gets nice-looking alloy wheels and two-tone paint scheme, with a floating roof design. The rear door handles are located on the C-pillar, behind the rear door window just like in Tata Altroz and many other cars. 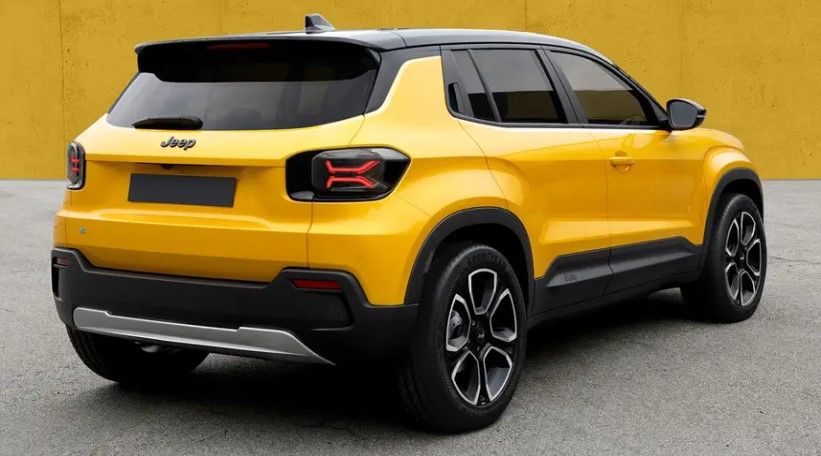 The rear gets a clean design and reminds of the smaller Jeep Renegade SUV. The tail lights are squarish (again reminding the Renegade) with X-shaped LED inserts. It gets a shark fin antenna, roof mounted spoiler and rear wiper. The taillights have a recess beside them and makes the SUV feel bigger than it looks.

Judging by the images, the electric Jeep looks to be of the size of the Renegade or the Jeep Compass. The carmaker didn’t reveal the interiors yet but promised host of advanced technology features and a modern cabin.

As said by the company, this all-electric Jeep would be a pure off-roader, just like the fossil fuel powered Jeeps. If this is to be true then Jeep can fill the void left for off roading enthusiasts, who stay away from electric SUVs due to their lack of off-road capabilities.

Jeep hasn’t revealed where it will be launching its first electric car but it may decide to bring the electric Jeep in India as a CBU and in limited numbers. As India’s electric car market continues to grow with buyers also lapping up the limited number of luxury electric cars brought in as CBUs in the country as evident from the BMW iX, which sold out in 24 hours of its launch.

Inside too, the new Compass Trailhawk gets red stitching for the seats, powered and ventilated front seats along-with the updated dashboard of the facelifted Compass. Jeep is planning the new seven-seater 2022 Jeep Meridian SUV India launch in May as covered by us earlier.