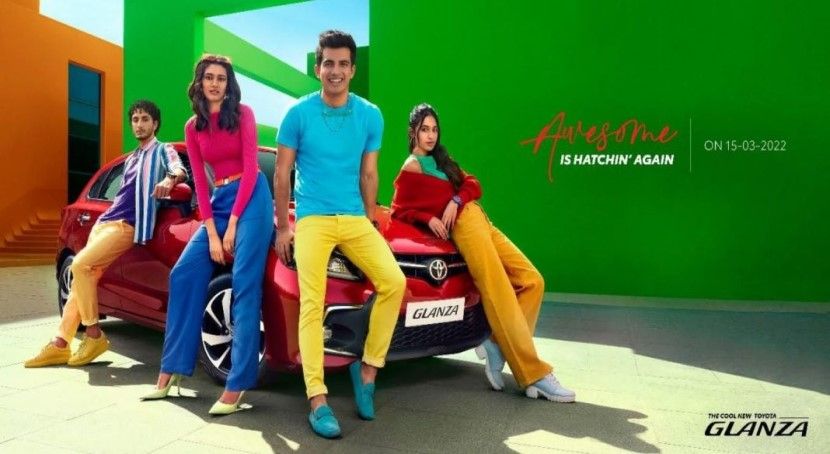 Toyota has teased the all-new 2022 Toyota Glanza, which is based on the 2022 Maruti Suzuki Baleno. The new Baleno 2022 was launched last week in India to much fanfare. Glanza car was the first cross badged car in India, from Toyota and Maruti Suzuki. The global partnership between the two companies is going strong with a host of cross badged products already launched and many more in the pipeline.

The Japanese auto giant released the official teaser and has revealed that the car will be launched on March 15. The bookings have also started at a few dealerships. Toyota currently retails, Glanza hatchback and the Toyota Urban Cruiser based on the Maruti Vitara Brezza in India. The two companies had already made it clear that there will be more shared products in the future. Here are the known details about the upcoming Toyota Glanza:

Just like the recently updated 2022 Baleno, the new Glanza 2022 will also get a few design updates. The updated hatchback will get brand new front look, with edgier design then the Baleno. The new grille will get the signature, single slat grille from Toyota.

The headlights will also be re-designed and get new LED DRLs. Lower down the front bumper too gets an aggressive design with large air intake with mesh grille. The fog lamp housings too are different with chrome surrounds for the fog lamps.

The profile looks similar to the new Baleno but it gets new alloy wheels. From the rear, the LED taillights have slight update, while everything else remains similar to the Maruti car. Judging by the teaser, the new Glanza looks more menacing than the sleek looking Baleno.

Just like the car its based on, the Glanza will get a refreshed interior. It will look premium with newer materials and layered dash design. The interiors will remain similar to the Baleno except for the Toyota badging and will get features like, 9-inch touchscreen infotainment with connected car features, rear AC vents, a head-up display, 360-degree camera and 6 airbags with ESC (Electronic Stability Control).

Since the Glanza will be positioned as a premium offering than the Baleno we expect Toyota to add a few more goodies like premium upholstery, wireless Android Auto and Apple CarPlay among others.

The engine will be carried over from the 2022 Maruti Baleno, which is the 1.2L, K series dualjet petrol engine making 90hp and 113nm of torque. The transmission duties will be done by a 5-speed manual gearbox while the CVT automatic gearbox has been replaced by an AMT.

Since the Baleno gets the AMT, we expect the Glanza to follow suit and ditch the CVT. This is to be done to keep costs in check as the company is offering many first-in class features.

The global technological partnership between these two car makers will result in more cross-badged products in the future. Up until now only Toyota released cross-badged cars from Maruti but this year Toyota will launch a cross-badged for Maruti Suzuki.

Toyota will launch the new Urban Cruiser after the 2022 Maruti Vitara Brezza launch in India. The company also plans to launch the Maruti Ciaz based Toyota Belta sedan and the Maruti Ertiga based Toyota Rumion MPV in the Indian market later this year.

The festive season will see a new Hyundai Creta rival, mid-size SUV, jointly developed by Toyota and Maruti. It will be manufactured at Toyota’s factory and Maruti will launched its re-badged version later.

Toyota currently has its hands full due to the overwhelming response it received for the 2022 Toyota Hilux pick-up truck scheduled for launch in March. The company has stopped taking bookings and has stated deliveries will start from April 2022.