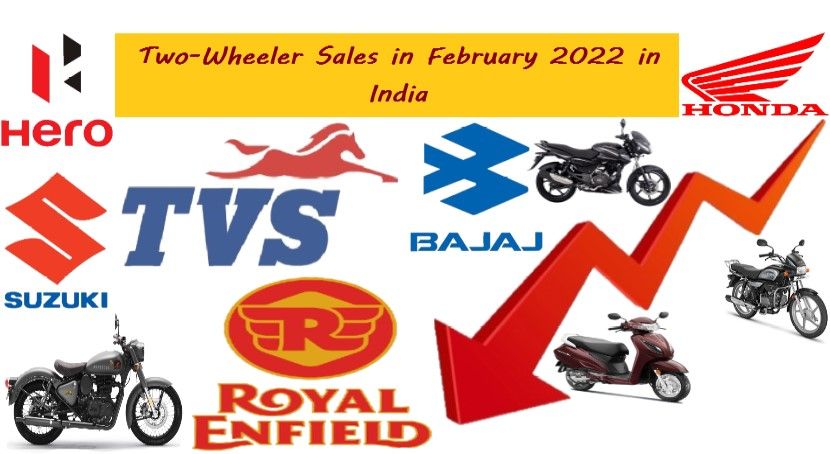 Two-wheeler sales in India are continuing to spiral down as 2022 has started on a disappointing note and the second month also failed to bring any smile on the faces of the company executives. The YOY sales were down by 27% as only 9,97,528 units were sold last month compared to the 13,64,734 units sold in February 2021. The MOM sales also registered a de-growth of 8.2%, which were down from the 10,87,496 units of January 2022. Here are the detailed sales numbers of the major two-wheeler manufacturers in India:

TVS also registered negative sales last month as YOY sales stood at 1,73,198 units instead of the 1,95,145 units sold in February 2021. Thus, the company reported a loss of 11.25%, which is not huge compared to the losses of other companies. The company however had a fruitful February, as its MOM sales increased slightly by 3.2% from the 1,67,795 units sales of January 2022.

Bajaj reported decline in its Year-on-Year sales as well as its Month-on-Month sales also plummeted in the red. The MOM sales decreased by massive 28.7%, down to only 96,535 in February 2022 compared to 1,35,496 units of January 2022. Among the major two-wheeler companies this was the steepest fall in monthly sales for any company. The YOY sales were down by 35% from the 1,48,934 units sold in February 2021. The company is looking to update the entire Bajaj Pulsar bike range in India in this year, as the current line-up is ageing compared to the rivals.

Another tow-wheeler manufacturer, Suzuki Motorcycles India saw its sales decline, but it had less impact on its sales due to the marginal dip in sales numbers. The YOY sales were down by 927 units, as the company sold 58,603 units last month compared to 59,530 units it sold in February 2021. The MOM sales also declined by 3% from the 60,623 units it sold in January 2022. Its sales are expected to improve next month as it recently launched the Suzuki Avenis 125 price Rs 86,700, scooter in India.

Royal Enfield, the undisputed king of the cruiser bike market in India, showed marginal growth of 4.8% in MOM sales as it sold 52,135 units last month against the 49,726 units it sold in January 2022. The YOY sales were down though, as the company reported a loss of 20% in its yearly sales, which stood at 65,114 units in February 2021. The company has recently trademarked the Constellation name in India for one of its upcoming bikes.