The Toyota Camry Hybrid facelift will get its India launch soon according to the company. The updated Camry was unveiled globally in late 2020 and now Toyota is ready to get it to the Indian shores in the coming months. The 2022 Camry Hybrid will get a few changes to the design as well as the features list, with limited mechanical changes as this is not a completely new generational change but a mild update for the sedan. 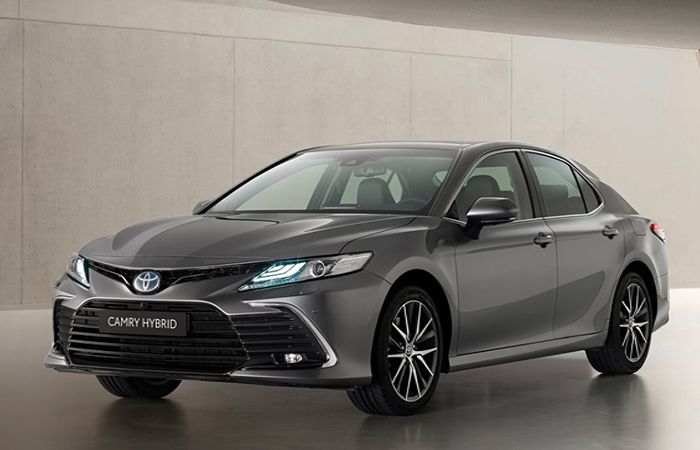 Toyota had launched the 8th-gen Camry in January 2019 for the Indian market based on Toyota’s TNGA (Toyota New Global Architecture) platform, as the sedan got a bolder and sleeker design language from the Toyota designers while maintaining the premium-ness of the car and the facelifted version will also remain pretty much the same.

The Camry facelift gets Toyota’s signature single-slat grille with a chrome strip in it as well as a reprofiled front bumper, with a wider ai-intake, now lined heavily in chrome accents while the headlights mostly remain the same but the LED taillamps will get new inserts in them. From the side retains its looks with a bold crease running from the front fender to the rear and the rear window line rising up to give the sedan an upright profile, how-ever there will be new design for the alloy-wheels on offer.

The cabin of the best Toyota Camry will be unchanged except, the biggest change being the floating 9-inch touchscreen infotainment screen replacing the earlier 8-inch unit and has upgraded software on board for faster performance. To adjust the new screen the central air-con vents have been moved down and are now just above the climate control system.

In terms of features and safety the updated Camry car will be well equipped, like the older model getting features like a three-zone climate control, premium, 9-speaker JBL sound system, electrically-reclining rear seats, electrically operated sunshades for the rear passengers, ventilated front seats having a memory function on the driver’s seat, reversing camera, heads-up display unit, 9 airbags and many other safety features are to be expected.

The new Camry will continue using the hybrid system of the outgoing model, which had a 2.5L petrol engine making 178hp and was mated to a 160kW battery pack and a permanent magnet synchronous motor, giving a combined output of 218hp, whereas the transmission duties will be done by a CVT gearbox. Due to the hybrid system usage, the current-gen Camry gives a claimed mileage of 23.27kpl, and the upcoming car is expected to deliver something of a similar figure.

The Toyota Camry hybrid price is Rs.41.2 lakhs currently but the new model will command a premium over the current gen model. The new Camry doesn’t have any direct rivals in the hybrid space but it will continue to rival the Skoda Superb in the premium-executive sedan segment in India.

Toyota is looking to start this year on a strong note and has further launches like the Belta sedan which is a re-badged Maruti Suzuki Ciaz, the Hilux pick-up truck and many other vehicles.