The last week brought much exciting news in terms of new launches and other announcements. As the ongoing Russia Ukraine conflict will negatively impact automobile industry, which is already reeling from the Covid-19 pandemic. The year 2022 will still be eventful as judged by the last week. 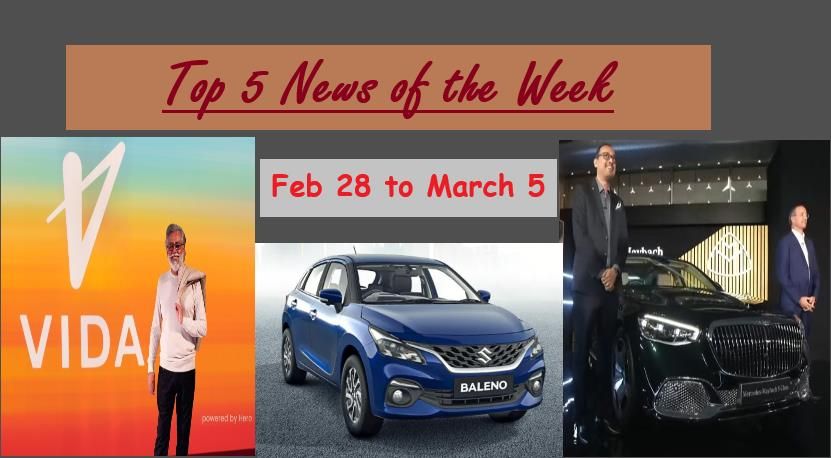 Here are the Top 5 News of the Week, gone by:

The new 2022 Baleno is in line with the new philosophy of Maruti Suzuki cars with new design and tech features. The new Baleno is sleeker in its looks with a squarish front grille and larger LED headlights. The LED DRLs are also different with re-designed bumper and front fenders.

There are new alloy wheels as well as new L-shaped taillights and new rear bumper. Inside the changes are quite comprehensive, with new dashboard layout and textures. The features include a 9-inch, free standing touchscreen infotainment screen, customisable head-up display, 360-degree camera, connected car features with Amazon Alexa support and rear AC vents among others.

According to news reports, the first Honda electric scooter will be launched in India next year. The Japanese company, has adopted the wait and watch policy up until now in terms of launching an EV in India.

The largest scooter manufacturer in India may name its EV as the Honda Activa Electric. This will be a masterstroke in terms of marketing as the Activa name is synonymous with durability and reliability in India.

The petrol powered Activa is the highest selling scooter in India and can help people migrate to electric two-wheelers fast. Read our full coverage of the upcoming Honda Activa EV in 2023 here.

Mercedes Benz has launched its first product of 2022 in India and what a way to start the year in terms of launch. The German auto major launched the Mercedes Maybach S Class in India last week.

The Maybach S Class price starts from Rs 2.5 crore for the S580 model while the more powerful Maybach S680 price is Rs 3.20 crore. The S580 will be locally assembled in India as announced by the company, while the S680 will be a CBU import.

It will be the flagship car for the brand in India and gets added luxury and comfort features over the standard Mercedes S Class. Click here to know the full details of the 2022 Mercedes Maybach S-Class.

The largest two wheeler manufacturer in the world- Hero Motocorp officially announced its foray into the electric two-wheeler market.

Hero Motocorp revealed the Vida EV brand to the world as its flag bearer in the electric two wheeler space. Due to the presence of Hero Electric in the market and the ongoing dispute over the use of the Hero name, the company launched a new electric sub-brand.

This year promises to be another record breaker in terms of EV sales in India while the ICE vehicles look to have a fight on their hands. The total car sales declined 1.8% in terms of YOY sales despite witnessing a 2.7% growth in MOM sales. Find out about the top 10 car brands in February 2022 in India.

Two-wheeler sales too declined by 8.2% compared to January 2022 whereas the YOY sales decreased significantly by 27% last month. Read to know about the top selling two-wheeler brands in feb 2022 in India.