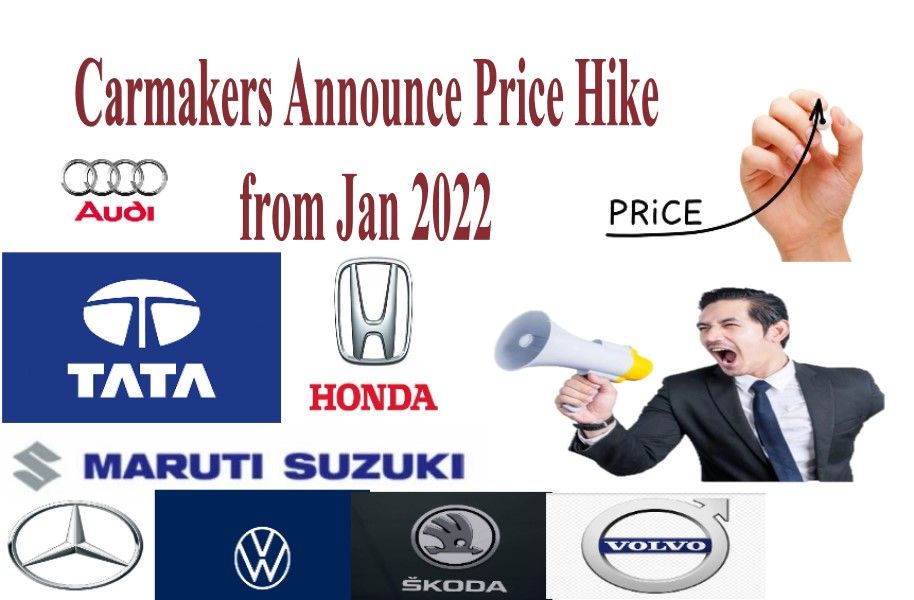 Indian carmakers have announced a price hike from January 2022 so, if you are planning to buy a new car now is the last chance to book your car and save your precious money in the process. Companies like Maruti Suzuki, Tata Motors, Skoda, Honda, Kia and others have announced a hike in prices for their cars to offset the rising input and material costs. This is not new as we have seen carmakers announce price hikes from the start of a new year but this time its different as several of the auto-majors had already hiked prices this year due to the pandemic induced supply chain woes.

Maruti Suzuki was the first to announce a price hike from January 2022 for all its models in the Maruti Arena and Nexa line-up. The company had already hiked the prices of its models thrice in this calendar year with the first hike in January, then in April and the third in September. Maruti however hasn’t mentioned the extent of the bump in prices but it won’t be significant as the company has most of its models in the budget category.

The Korean giant Kia will also increase the prices for its cars from January, while the company hasn’t mentioned the exact figures of the hike yet. However, the buyers who book their cars now will be immune from the price hike according to the manufacturer, which sighted the rising raw materials and transportation prices as the cause for this hike. Kia currently sells three cars in India consisting of two SUVs- the Seltos and Sonet and a premium MPV the Carnival, while its latest car, the Kia Carens MPV is ready to go on sale from next month.

Japanese auto-major, Honda is struggling to garner sales number in the Indian market despite its latest model, the Amaze registering decent sales figures since its launch. With this said the company is also mulling a price hike for all its models but it is yet to make any announcement in this regard as according to the manufacturer they are studying the offset in prices that is to be passed onto the customers. Honda sell 5 models in India like the Amaze, City (4th and 5th Gen) sedans, a SUV, the WR-V and a premium hatchback the Jazz.

Another Japanese major, Toyota has also announced that all its models in the country will witness price hike caused by the common reason of rising commodity and input costs. The company hasn’t mentioned the extent of the price hike but it will vary depending on the model.

Skoda has also announced that all its cars will get dearer by upto 3% from January 1st, 2022. The company had hiked its prices once in 2021 and is going to do the same for its entire line-up as the company marches on its India 2.0 philosophy with the launch of the Skoda Slavia sedan next month.

German auto-major, Volkswagen will also hike 2-5% of the prices across all its models except the recently launched Volkswagen Tiguan facelift. The company currently sells the Polo, Taigun and the soon to be replaced Vento sedan. Volkswagen will launch the Vento replacement, the Volkswagen Virtus in early 2022.

Like its parent company, Audi will hike its car prices by upto 3% on all its models citing the rising costs due to the pandemic and its aftermath. Audi will launch a slew of cars next year to regain its lost market share with models like the Audi Q3, Q5 & the Audi Q7 facelift among others.

Mercedes-Benz cars will be dearer by upto 2% from January 2022, like many of the other manufacturer’s products. According to a statement by the company, the customers who have booked or will book their cars in 2021 will be safe from the price hike.

Volvo, the Swedish luxury carmaker, like its other counterparts will be increasing the prices of its select models from January 1st to offset the rise in Input and commodity costs. The price hike will range between Rs. 1-3 lakhs. The company currently sells four models in India with three SUVs like the XC40, XC60 and the XC90 and a sedan the SC90. Volvo has already announced that it will go all-electric by 2030 and will launch its first electric car in India, the Volvo XC40 Recharge SUV, next year.